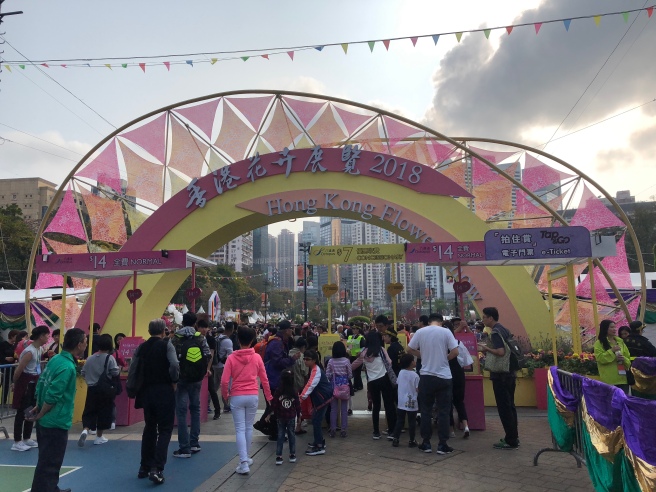 One thing I love about Hong Kong is how many organised events are on during the year. One which has proven to be elusive over the past few years however has been the annual Hong Kong Flower show at Victoria Park; it seems that every time it came around, we were out of town to my disappointment.

With this in mind, you could imagine the pure joy when I spotted the flyer advertising this years show a few weeks prior and I realised that for once we would be here during March to enjoy it.

Excited, I asked Panda if he wanted to go; his eyes said “I’d rather swallow razor blades than go to a flower show” but he agreed to go to appease his wife.

We had been ridiculously busy during this period as we were moving apartments but Panda kept his word and arranged a day for us to go. Even more exciting was we would meet some friends there, which would be a nice break from the insanity of moving.

So off we went. I armed myself with my favourite sun hat and spf 50 for a Sunday afternoon at the park, with a heavy air of expectation- this was a Hong Kong Bucket list moment!

At this point, a Hong Kong savvy person may have had alarm bells ringing in their head at the fact that we had planned to go on a Sunday afternoon; Sunday is the busiest day of the week in Hong Kong, every single week, in every single place! Usually I may have clued onto this fact, except we were in the midst of moving and between brain fog and lack of availability, Sunday seemed like a good time to go. Rookie mistake, whoops!

Arriving, our first observation was a sea of people, most of which were doing selfies or just trying to get close enough to the displays to get a good photo.

Admittedly not as busy as the last night of the Chinese New Year Flower Market, but close!

At this point I am 200 % sure if we were not with  friends, Panda would have “renegotiated” the terms of our afternoon activities, and we would have ended up at one of the local shopping centres- which at this point was also swarming with people!

To venture into the park, we had the option of getting a physical ticket or the more efficient (and environmentally friendly) method of swiping your Octopus Card. To my surprise, the entrance fee was only $14 HKD for full price tickets (roughly $2.30 AUD) which was crazy good value considering the time, planning and resources put into the show.

So off we went, wading through the sea of bodies (and selfie sticks) trying to get near the displays. Patiently waiting in the lines around the displays, it was a matter of shuffling up to the front, taking the obligatory pic and moving on in a timely manner so that the crowd behind you could also get a look. Most people were well behaved but with every crowd there is always the odd person who thinks queuing does not apply to them. 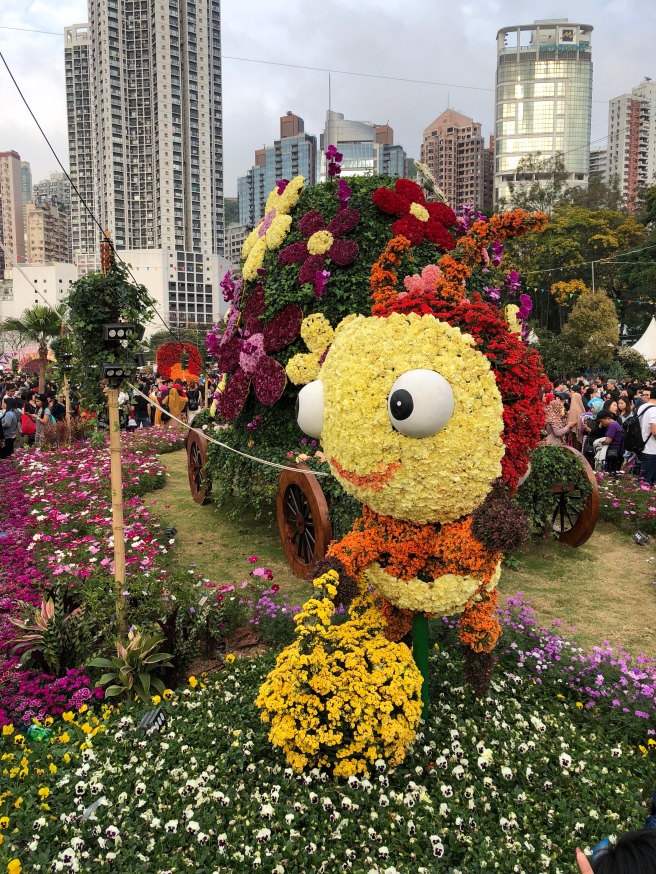 As great as the displays were, I realised after the first few that I hadn’t even taken the time to fully appreciate them in the crush of the crowd. You could say, I literally did not have enough time to stop and smell the roses!  Still, I was rather inspired by some of displays, and despite my lack of gardening ability, it made me miss my backyard in Australia as I considered all the things that I could do and plant in our garden when we go back someday, touch wood!(no pun intended!)

Foot traffic around some displays did not seem to move very fast so we skipped some regrettably. In the end, we left relatively early with the intention of coming back on a less crowded day, or at least that was the plan. We did not quite get back there, and while I have technically ticked that box on my bucket list, I am already hoping that we will be around next year so that I can get the full experience.

Having said that, I am still glad we went. Some displays I really liked; 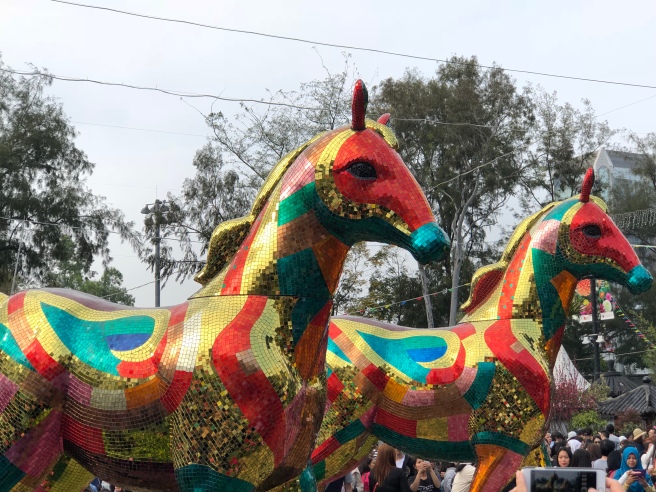 And this whimsical cottage with the most lovely garden. 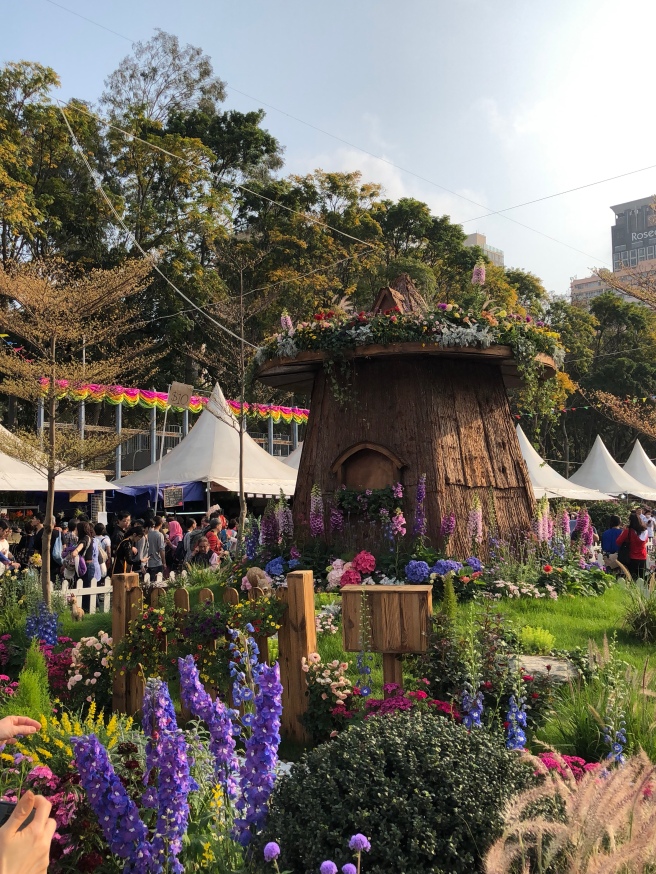 I already wanted to move in to the whimsical house then Panda pointed out the resident squirrel. So cute! 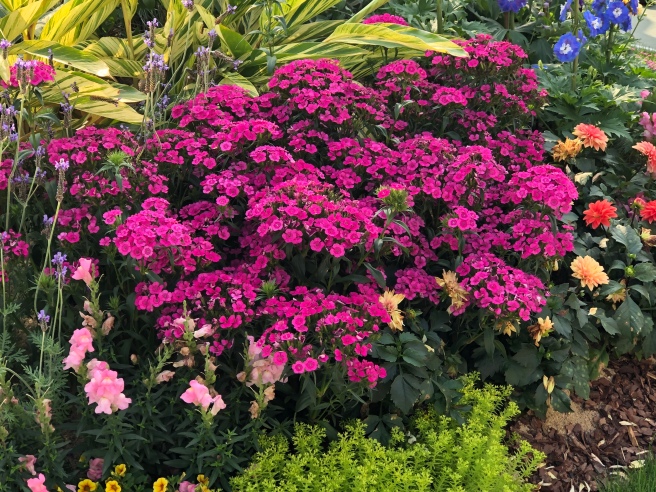 Fact: I don’t just love Pandas. One of my favourite animals are rabbits, so any thing rabbit related, I cannot get enough of. And certainly these little ones were no exception. Look at those loveable faces!

It was also exciting to see these guys as it was almost Easter, so this was a seasonal reminder that it was spring and the Easter Bunny was coming soon- though I think the Easter Bunny did not get my new address this year as he didn’t come to me!

Then there were these butterflies, that reminded me of the white butterflies I often see fluttering around in my backyard in Melbourne, just a little smaller!

Such a simple addition to the garden, but a nice touch!

This table set up (below) inspired me a little. In Australia, we use our back garden as another room in summer, preferring to sit out there when evening comes and the outside temperature is cooler than the inside of the house. I would not object to having this set up for those twilight meal times. Take note Panda Man!

My favourite pick of the bunch however was the most simple; this carpet of beautiful tulips. I stood and gazed on its beauty for as long as I could. Give me a dozen tulips over a dozen red roses any day!

🐨An Aussie koala, who is a lover of Hong Kong- reliant on good coffee, enchanted by nature and all things cute and cuddly. Chronically analytical and amused by small things. In a relationship with food! View all posts by akoalagirlinapandaworld